The beef shortage is currently filled through imports of chilled and frozen meat from various countries and the import of Australian feeders for fattening. The Indonesian government is eager to produce more beef domestically and to reduce beef imports. One solution is to increase cattle breeding in Indonesia with the view to producing feeders locally.

The Indonesia-Australia Commercial Cattle Breeding (IACCB) Program has piloted four models of cattle breeding with 8 private partners (corporations and cooperatives/farmer groups) in 5 provinces in Indonesia. The cattle breeding models include: 1) integrated oil palm and cattle production (SISKA); 2) a combination between cattle in oil palm and breedlot (Semi SISKA-Semi Breedlot); 3) open grazing, and 4) cut and carry, that is traditionally carried out by smallholder farmers.

On June 4th 2020, IACCB invited its partners to share, via Webinar, their achievements, challenges and opportunities faced over their three years running their cattle breeding enterprises.  The partners explored whether the commercial cattle breeding models are commercially feasible for Indonesia. The 2.5 hour webinar was attended by 363 participants, with around 100 people participating through the Partnership’s youtube account @IAredmeatcattle.

The webinar was facilitated by Yopi Safari, the Chief Editor of TROBOS an Indonesian livestock sector magazine, and featured Ir. Sugiono MP, the Director of Livestock Breeding and Production from Ministry of Agriculture and Dr. Ir. Atien Priyanti Sudarjo Putri, M.Sc – the Acting Head of Center for Livestock Research and Development. Presentations were provided by IACCB partners on each cattle breeding model, and a discussion led by  Paul Boon, IACCB’s Strategic Adviser, examined the commercial potential of each.

All speakers agreed that the most important requirements for commercial success was strong management commitment and competent and professional operational staff who have a passion for cattle breeding. Other key success factors include a robust monitoring and data recording system that drives productivity analysis, good decision making and as a result, profitability.

Success also very much depends on production costs which will vary dependent on the location, with the cost of capital, land, human resources and quality feed and its availability, of particular importance.

Presenters also alerted the audience to the challenges faced by cattle breeders in Indonesia. They noted that quality feed availability is directly impacted by Indonesia’s wet and dry season’s with some regions experiencing extreme variations dependent on the season.  A lack of quality feed reduces cattle condition, which increases calf mortality and decreases their average daily growth, ultimately decreasing grower productivity and profitability. Dr. Sudarjo Putri stated that production of cheap quality feed using agricultural by-products,  and optimizing the use of locally available  natural resources will be critical to the future expansion of Indonesian cattle breeding.

Notwithstanding the challenges, Ir. Sugiono argued that based on the experiences of IACCB partners, beef cattle breeding  in Indonesia was very promising. ‘We now have evidence that Indonesia can produce feeder cattle at a comparable price to that of imported Australian feeder cattle’.

The future does indeed look promising for cattle breeding in Indonesia. 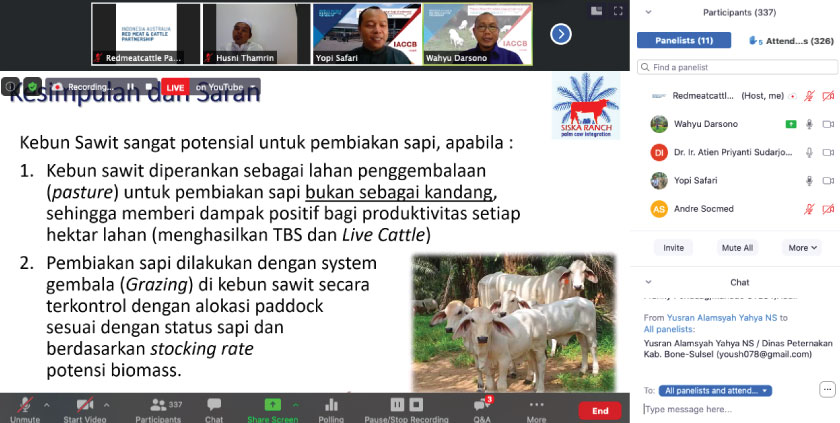 The Indonesia Australia Partnership on Food Security in the Red Meat and Cattle Sector is a Heads of Government initiative funded by the Australian Government. The secretariat and policy lead is the Department of Agriculture, Water and the Environment in Australia and the Indonesia Investment Coordinating Board (BKPM) in Indonesia.